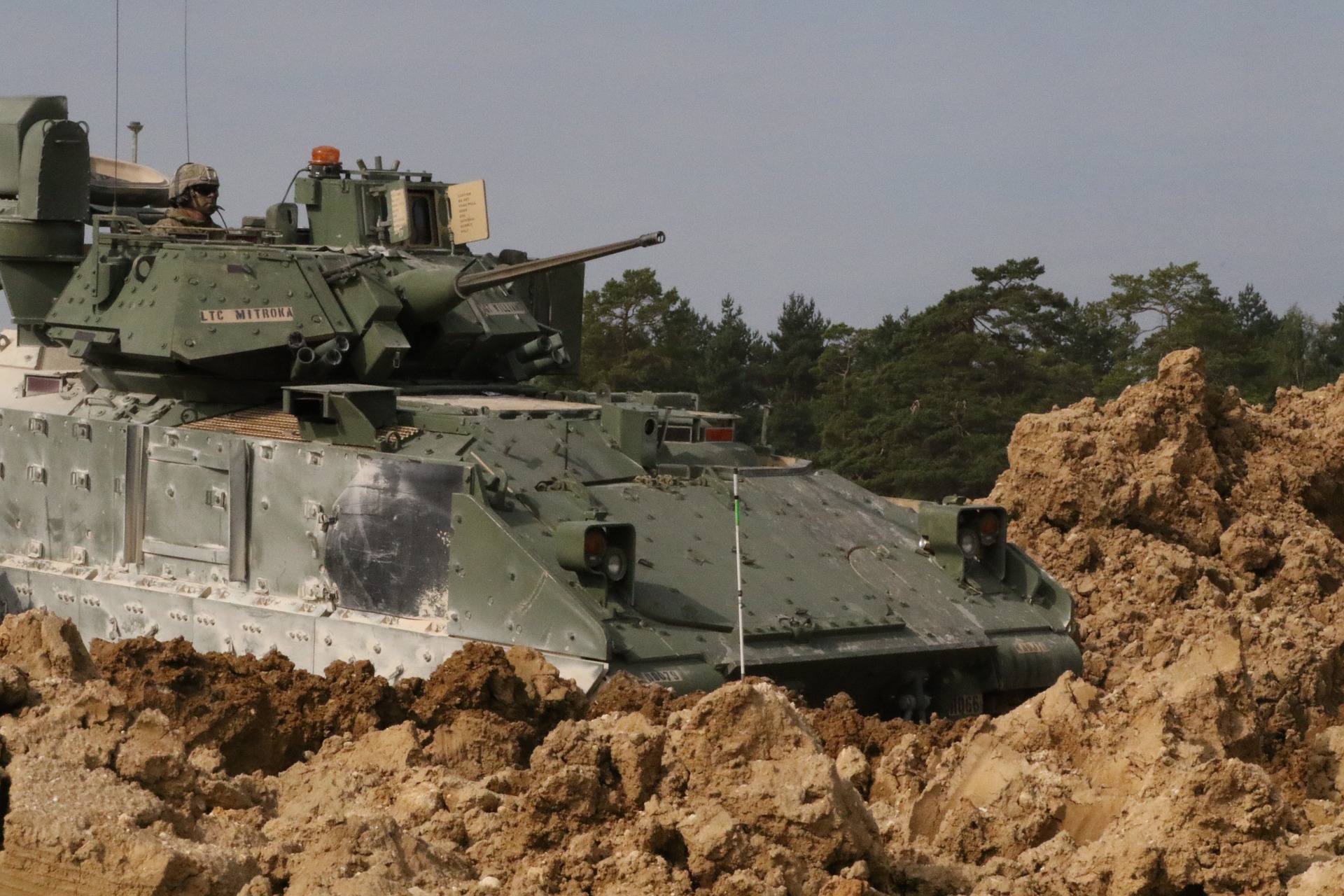 The Bradley Fighting Vehicle (BFV) is a fighting vehicle platform of the United States manufactured by BAE Systems Land & Armaments.

Named after US General Omar Bradley, it is a combat proven platform that provides outstanding mobility and as such is an integral part of the US Army’s Armoured Brigade Combat Team (ABCT).

It is designed to transport infantry or scouts while providing covering fire to suppress enemy troops and armoured vehicles and there are several variants, including the M2 Bradley infantry fighting vehicle and the M3 Bradley cavalry fighting vehicle. Since 1981, 6,720 Bradley Fighting Vehicles have been fielded, mainly in the US and Saudi Arabia.

The Bradley Fighting Vehicle was developed largely in response to the Soviet BMP family of infantry fighting vehicles. It was designed to serve as both an armoured personnel carrier and a tank destroyer, and one specific design requirement was that it should be as fast as the new M1 tank so they could maintain formations while moving.

The earliest specification, from 1958, called for a vehicle of no more than eight tons, mounting a turret with a 20mm autocannon and a 7.62mm machine gun, with sealed firing ports for five infantry gunners, and early plans of an advanced armour personnel vehicle were being discussed in the early 1960s, even as the M113 Armoured Personnel Carrier was just entering service.

The Bradley Fighting Vehicle entered production in 1981 and became a replacement for the M113. It is considered to be a more powerful and faster vehicle than the M113, and its better suspension increases speed on off-road terrain.

The M2 and M3 Bradley Fighting Vehicle is a lightly armoured, fully tracked transport vehicle that provides cross-country mobility, mounted firepower and protection from artillery and small-arms fire. It is used in mechanised infantry and armoured cavalry combat.

As well as possessing sufficient cross-country mobility to keep up with the M1 Abrams Main Battle Tank, the BFV also has medium and long-range firepower. The M2/M3s primary armament is a 25mm cannon that fires either 100 or 300 rounds per minute and is accurate up to 3,000 m, depending on the ammunition used. It is also armed with a TOW missile launcher that is capable of carrying two loaded missiles.

The missiles, capable of destroying most tanks to a maximum range of 4,000 metres (13,000ft), can only be fired while the vehicle is stationary. The Bradley also carries a coaxial 7.62mm medium machine gun, located to the right of the 25mm chain gun.

All Bradley's are also amphibious. Earlier models are equipped with a water barrier, which is fitted by the crew before entering the water and A3 models have an inflatable pontoon which fits on the front and sides of the vehicle. Water propulsion is provided by tracks and the Bradley can attain a maximum speed of 7.2km/h in water.

The use of aluminium armour and the storage of large quantities of ammunition in the vehicle initially raised questions about its combat survivability. As such, spaced laminate belts and high-hardness steel skirts have been added to improve the side protection of later versions, although this increases overall weight to 33 tons.

The M2 holds a crew of three (a commander, a gunner, and a driver) along with six fully equipped soldiers, whilst the M3 mainly conducts scout missions and carries two scout troopers in addition to the regular crew of three, with space for additional BGM-71 TOW missiles.

Informal discussions for the next follow-up effort were dubbed as the Future Fighting Vehicle (FFV) in May 2015, and in 2018, the NGCV team was soliciting industry feedback for an Optionally Manned Fighting Vehicle (OMFV).

However, on January 16, 2020, the Army withdrew the $45 billion contest to replace the Bradley with the Optionally Manned Fighting Vehicle - meaning that by the time it is replaced, the BFV will have been in service for an incredible 50 years.

At M&E, we have a wealth of opportunities for mechanics interested in overseas contract work. British mechanics are often limited to working on British equipment, whereas contracting overseas gives them the chance to expand their knowledge and experience.

With the contracts we have available at M&E, mechanics can work with US equipment and tracked vehicles such as M1 tanks and Bradley Fighting Vehicles without having to join the army - and by embracing this opportunity to explore new equipment, contractors have unrivalled potential when it comes to career development and boosting their skill sets.

To find out more about how overseas contracting and working on equipment such as Bradley Fighting Vehicles can maximise your career, make sure you read this blog with one of our expert consultants.

Want to find out more?

From Afghanistan to Germany, at M&E, we have contracts in a number of different countries and offer a range of heavy vehicle mechanic contract jobs, including opportunities to work on vehicles such as Bradley Fighting Vehicles. So, if you want to find out more about our current vacancies, don’t hesitate to contact a member of our dedicated team today.

Big, boxy and with a wheel at each corner, the Humvee is the perfect combination of no-nonsense...
Read More

What is a Boxer armoured fighting vehicle and what does it do?

Although the Boxer originally entered production back in 1993, it has become especially newsworthy...
Read More